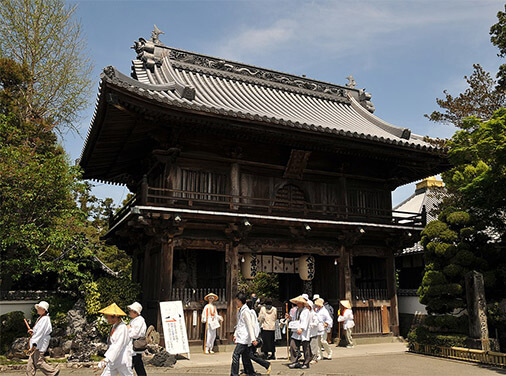 Reading Time:  4 minutes
They exemplify the spiritual principles of care, love, trust, and respect — i.e. thoughtfulness — as being beneficial for all sentient beings.

Just outside of the city, in the western outskirts of Kyoto, the hills are lush and lined with flowers. Cedar, maple, spruce, pine, cherry and plum trees blanket the mountainside. It is a gentle beauty.  At the foot of the mountain and sprinkled throughout the hills, farmers and local people alike have tended to their thriving vegetable gardens, verdant rice paddies, persimmon and kiwi trees, grape vines, and bamboo forests.

Walking through this dense, lively landscape, the sound of clear running water is always present — flowing through stone irrigation channels, dropping into rivulets, rushing softly underfoot beneath metal grates and small stone bridges. Dams tiered, and artfully folded into the mountainside wait patiently. In case of typhoons and rain they can divert heavy waterfalls and prevent landslides.

Decorous temples and devotional shrines appear here like flowers as if they have grown up naturally.

Our temple is nestled in these foothills. And learning how to appreciate this particular landscape is an education in itself.

The poetic beauty of Kyoto hasn’t appeared by accident. Those of us who grew up in the U.S. might learn from this ancient culture. If you contrast Kyoto’s lush growth and wet earth with the Rocky Mountains’ dusty trails or California’s brown, naked hills, you can start to appreciate how nature has been cared for near Kyoto, and how such an environment can, in turn, support its population. One large tree holds up to 100 gallons of water in its trunk. The trees are great reservoirs for water that keep the mountains healthy.

Today, Japan’s mountains are overflowing with trees. These healthy mountains feed streams and rivers that flow into the ocean, supporting clean water that, in turn, supports healthy marine life. Fish and seaweed are the staple of a healthy diet in Japan. Keeping the environment healthy keeps the people healthy. But tree groves are more than nature growing freely and rampantly, and rice fields serve a deeper purpose than providing food or income. They exemplify the spiritual principles of care, love, trust, and respect — i.e. thoughtfulness — as being beneficial for all sentient beings.

It is said that as a young man, the monk Kūkai (774-835) jumped from a 1,000-foot cliff into a deep creek to test if he was great. He surmised that to survive this potentially fatal jump would prove that he was loved by Buddha. He did survive, which confirmed for him that his life was greater than an emperor’s, since he was unafraid of death. Armed with this confidence he believed he could —and would — achieve something great in his lifetime, which he did.

Kūkai is the monk who planted trees in the Japanese mountains. Kūkai was a Japanese Buddhist monk and civil servant, scholar, poet and artist who founded the esoteric Shingon school of Buddhism. He left Japan to study Buddhism in China and while there, he heard stories and read widely of China’s lavis­­­­h gardens and gorgeous natural environment, though when he arrived all was a barren desolate landscape.

Apparently, the stories Kūkai heard about China’s natural beauty were outdated. By the time he arrived, China had already used up its resources and failed to replenish what they had extracted. Seeing this devastation, Kūkai determined to keep Japan fertile, and resolved to cover the mountain sides of Japan with trees, instituting national policies that encouraged farmers to plant in the off months until all of the mountains became green with foliage, as they are to this day.

The Vitality of the Wonderful Way

With the knowledge he gained from China, Kūkai built dams and tunnels through the mountains to help people. He was also responsible for building hundreds of temples throughout Japan. People still go on pilgrimage by foot to visit Kūkai’s temples. In the prefecture of Shikoku alone there are 88 temples in Kūkai’s pilgrimage. Pilgrims walking from temple to temple for three to four months offer worship, give thanks, and look for meaning and purpose in life through difficult times.

Giving thanks, offering devotion, supporting natural resources, and planting trees are activities that create a gentle, supportive, subtly beautiful environment. Unfortunately, these qualities aren’t found so much in contemporary Western culture. Instead of planting trees on our land we raise cattle and use additional resources to support that cattle. The land isn’t nourished; it is poisoned. The mountains are mined for precious materials. Resources are not nourished they are exploited. Resources exists for systems’ sake, not for the cultivation and preservation of small-scale, intimate human life.

The Japanese landscape is regenerative. It is temples and cultivation of nature, humans, and trees. Where there are people living in a conscious relationship with trees, it is possible to regenerate and to nurture human life and sensitivity.

Twelve hundred years ago a monk asked his master,  Baizhang (720-814), “What is the wonderful matter?” The master answered: “It’s like sitting aloof on Mount Dashung.”

Where, these days, are we able to sit aloof? And what does it mean to do so?

To have lived such a life and to have helped others do the same — what could be more wonderful than this?