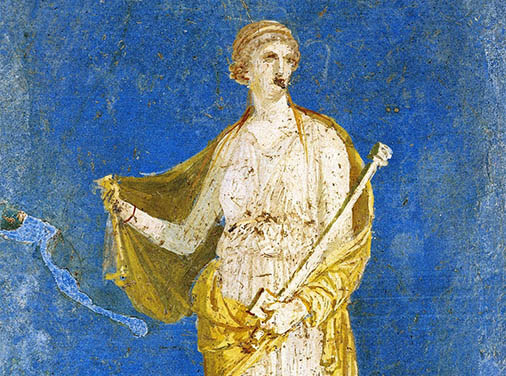 Reading Time: 7.5 Minutes
Facing life’s contradictions by contemplating Euripides is an opportunity for us to heal ourselves as well as our bewildered democracy . . .

Last week I went out for the BAM production of Medea. I’m a huge fan of Greek tragedy and Greek philosophy, and given the complexity of all that has been happening in American politics (i.e. the Senate impeachment trial) this past month, I thought it timely to revisit Euripides.

The production was modern, star-studded, and beautifully staged. Though it lacked as a Greek tragedy – being not at all Euripides’s Medea but rather a play inspired by it –  the production propelled me to revisit the original Medea‘s vital and challenging message.

Facing life’s contradictions by contemplating Euripides is an opportunity for us to heal ourselves as well as our bewildered democracy.

Medea has followed her husband, Jason, to live in Corinth after having helped him achieve fame and glory by concocting an herbal potion that brilliantly subdues a dragon.

As a result of Jason’s betrayal, Medea vows revenge, which Creon fears, as does the nurse of Jason and Medea’s children, who frets, “She’s a strange woman. I know it won’t be easy to make an enemy of her and come off best.”

And Nurse is right.

Medea does away with Creon and his daughter by poisoning them. And taking revenge on Jason, she stabs their two children to death, escaping with their dead bodies in a magic chariot that was given to her by her grandfather, the sun god, Helios.

Jason is abandoned, left to die alone, crushed in his sleep by the rotting hull of the Argos, the ship in which he performed his adventures, and in which he sailed with Medea to Corinth.

Fleeing to a Democracy

Thus, Medea makes her way to Athens, (regarded by ancient Greeks as an extraordinarily open and sophisticated city), where she has made arrangements to live under the protection of Aegeus, Athens’s king, whose tutelage she procures by promising to cure his infertility.

Medea was written by Euripides in 431 BC at the height of Athenian power during the time of their great general and statesman, Pericles. According to one of Britain’s foremost classicists, Edith Hall,  “The foundations of the cosmopolitan, innovative culture that nourished the Athenians’ open minds were laid with the revolution of 507 BC,” the result of which was a realization of the ideal  of isonomia—“equality for all citizens under the law,” an ideal upon, and around which, Athens struggled to live and organize life for roughly the next hundred years until the beginning of its demise with Pericles’ death (due to plague) in 429 BC. And Athens as a thriving democracy came to its end with Socrates death (by execution) in 399 BC.

Our Government is Called a Democracy Because . . .

As Hall writes, “the feature of the Athenian character that underlies every aspect of their collective achievement is undoubtedly their openness—to innovation, to adopting ideas from outside, and to self-expression.”

“We throw open our city to the world,” says the statesman Pericles, “and never expel a foreigner or prevent him from seeing or learning anything.” And in his famous funeral oration Pericles says, “Our government is called a democracy because it functions on behalf of the many and not on behalf of the few. Under our laws, everyone has the same entitlement as everyone else in private disputes. When it comes to social standing, we evaluate men according to their reputation, and their class background is less important than merit. Poverty is not a barrier, either, since a man who can do something to benefit the city is not prevented from doing so by coming from insignificant circumstances.”

Medea is granted refuge in Athenian democracy for her ability to cure the king’s impotency. She brings foreign knowledge and technology that benefits him. She is allowed political asylum because of her merit and ability to heal. The king does not know that she is an infanticide, but perhaps it doesn’t matter. Athens is a democracy – open to her as a foreigner so long as she can contribute to society’s well-being without harming others.

But what of the killing of her children? Is there a perspective from which such an act can be understood with sympathy? What evils are we willing to forgive for the benefits they confer upon us?

An open society struggles with its commitment to freedom, while having to govern and protect itself with limits. This is an eternal social tension we struggle with in the government of both our societies and our selves.

We Women are the Most Unfortunate Creatures

At the beginning of the play, Medea emerges from her apartment to address a chorus of Corinthian women and says,

“We women are the most unfortunate creatures.
Firstly, with an excess of wealth it is required
For us to buy a husband and take for our bodies
A master; for not to take one is even worse.
And now the question is serious whether we take
A good or bad one; for there is no easy escape
For a woman, nor can she say no to her marriage . . .
But we are forced to keep our eyes on one alone.
What they say of us is that we have a peaceful time
Living at home, while they do the fighting in war.
How wrong they are! I would very much rather stand
Three times in the front of battle than bear one child.
Yet what applies to me does not apply to you.
You have a country. Your family home is here.
You enjoy life and the company of your friends.
But I am deserted, a refugee, thought nothing of
By my husband—something he won in a foreign land.
I have no mother or brother, nor any relation
With whom I can take refuge in this sea of woe.”

[This and the excerpt below are taken from the Dover Thrift Edition, translated by Rex Warner, whose translation I recommend.]

More Clever Than the Average

And only a little bit later in her discussion with Creon she says,

“A person of sense ought never to have his children
Brought up to be more clever than the average.
For apart from cleverness bringing them no profit,
It will make them objects of envy and ill-will.
If you put new ideas before the eyes of fools
They’ll think you foolish and worthless into the bargain;
And if you are thought superior to those who have
Some reputation for learning, you will become hated.”

Jason’s betrayal of his marriage vow goes unpunished by the law of Creon’s Corinthian land. To the contrary, it is supported. As a foreigner, and a perceived threat to that land, Medea has no recourse to justice, which she takes into her own hands by killing her children.

Perhaps this seems irrelevant to contemporary audiences. But what about working mothers who, not having enough time for either work or family, feel guilty for not being able to commit fully to either. Do they not feel that in their compromise they are killing some part of their family or career? And what of women who are clear that they don’t want to participate in conventional marriage? And those people—male or female—who are afraid to shine at work because they know they’ll be hated in a culture that only rewards mediocrity or getting along for the sake of everybody’s comfort and convenience. What will be the consequences to our society if these issues are not addressed with wisdom, compassions, thoughtfulness, and care?

After two disastrous marriages and three children, Euripides retreated from society to a cave where he amassed a famously impressive library and lived “in daily communion with the sea and the stars,” presumably writing. Apparently, he wrote so well and insightfully that after the Athenians’ defeat by Sparta, legend tells us they traded renditions of his lyrics “to their enemies in return for food and drink.”

Medea, like Euripides is a kind of spiritual, literary genius, not at home in conventional society. Both of them are outcasts and exiles, critical of the societies in which they find themselves. And the response of those societies to them—and presumably to all of their talented outcasts—is Creon’s, “I am afraid of you.”

I have met Creon. He is the average-intelligence manager afraid of being shown up by a better, brighter underling. He is the husband or wife threatened by their partner’s spiritual work and any effort that partner might make toward a more harmonious, fulfilling life. He’s anything that exists that’s afraid of changing in the face of a better, more helpful idea. He is obstinate bigotry. Blind, self-serving belief.

But he is also the principle of order necessary to govern a society and a people. He is the father’s natural urge to protect the safety and well-being of his family. He is discipline and rule, without which civilization cannot exist.

What Euripides shows us, with the help of the Athenian democracy — without which his works would not exist — is that we are faced with powerful contradictions between, say, openness, on the one hand, and form, order, and self-preservation on the other.

Immigration today is an enormous concern as scores of people migrate from Asia, Africa and the Middle East to Western Europe and America. Our time is characterized by, as Samuel Huntington puts it in the title of his book, “The Clash of Civilizations.”

But these issues do not stop on the outside, so to speak. We have within us a thousand notions. We hold within us the battle of Creon and Medea—the sorceress and infanticide, as well as the self-serving, self-preservationist sovereign.

Medea murders her children to avenge her husband’s betrayal of her. And then she leaves him for Athens. For freedom. But in killing her children, has she not killed a part of herself?

What is Euripides telling us about the cost of Athenian democracy and citizenship, and its required sacrifices. Is such freedom worth it? Or not? It’s a question, I suppose, that we must each decide for ourselves.

The Opportunity to Solve Our Contradictions

We live in a time and a place that affords us the resources and leisure to contemplate, solve and respond to such contradictions in practice with our life. And this is an opportunity we ought not to squander. Medea solved her contradiction by outsmarting her oppressors, though it cost her her children. Though I’m sure that Medea’s is not the solution for you, her decision opens up a host of inescapable questions we’re better off being honest about considering, and answering sincerely, for ourselves and as a society.

For my part, I decided not to have children and instead retreat as much as possible with a small group of people into the mountains where I’m struggling to build a small sacred precinct in which to study Buddhism. This morning for example, in my daily meeting with seven like-minded people, we read a text from the Lotus Sutra, studying the Buddha’s body:

“Thatagata [Buddha’s body] is already detached from the Three Worlds which are a burning house, and is dwelling quietly being peaceful in the forest. Now these Three Worlds are all my possession.  The sentient beings within them are without exception my children. There is a lot of hardship and suffering, and I alone am able to save them.”

Egoists will misunderstand the Buddha’s “I” and “my” as egotistic – insisting on their view and meaning of the personal pronoun rather than understanding Buddha’s – in the reading.

But there is another way of reading. Through spiritual study and practice we learn to harmonize  contradictions between the demands of our personal life and the demands of truth in such a way that we can live without harming others.

What could be a more enjoyable path to healing democracy than this? 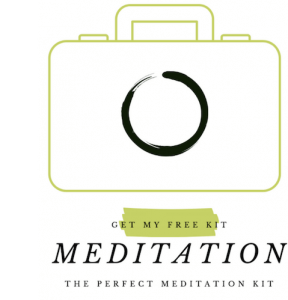 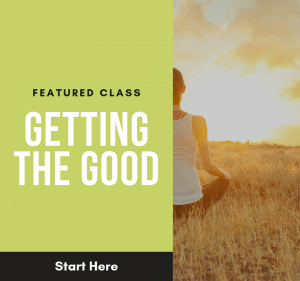 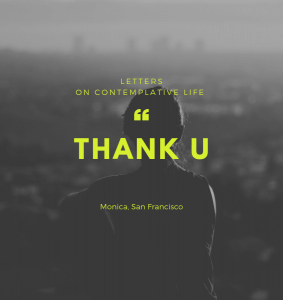 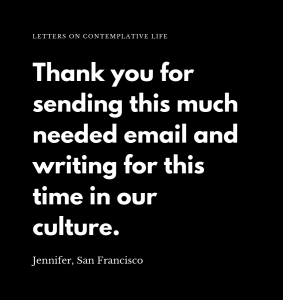 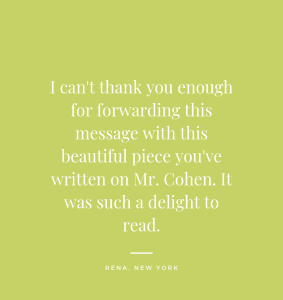