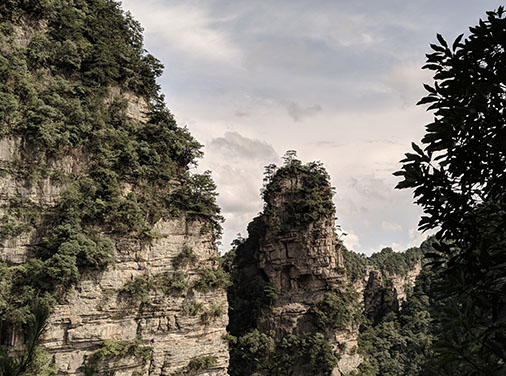 A Buddhist disciple offers a final good-bye to his beloved teacher, and sets out from the safety of his temple to deepen his practice of love and find the way.

We are told of a time when, as a final test of his student’s ability, Buddhist master Linji barred student Luopo’s exit.  In this episode, Linji (d. 866 C.E.) takes his priest’s staff, holds it horizontally and says: “If you can pass through this you can leave.” Luopu gives a shout. Linji strikes him. Luopu offers worship and leaves.

This incident is reported in Tsurngrung lu, Case 35, in a lecture on the case.

How does one make sense of this story?

The scene takes place at the end of Luopo’s training. He has finished his monastic study. Now he is going out into the world—into the mountainous wilderness of ninth-century China, full of ruffians, bandits, tigers, snakes, and wild boars.

The master is concerned for his disciple, whom he raised from youth, and whom he tests like a loving father, or like a mother sending their child out into the world. The bar represents the difficulties of the world, and the master is asking Luopo—’how will you pass through the difficulties of life? How will you face the challenges of old age, sickness, and death?’ His disciple shouts a shout in answer (which is an answer that’s beyond the scope of this column to explain). The Master gives a loving blow, the disciple offers a final good-bye to his beloved teacher in the form of a bow and sets out from the safety of his temple to deepen his practice of love.

The scene is foreign to us. Yet it may be more understandable than we realize. Everyday, we say goodbye to our self: to the self that has made it to today—to now—before we jump off to the next now, and do this process over and over again.

In our movement through life we sometimes meet a thing that seems to obstruct our progress from point A to point B. And meeting this obstacle, we ascribe its cause to something outside of us e.g. life, God, Buddha, karma, bad luck, etc.

Buddhism wants us to understand that both we and our obstacles are Buddha. And that since both we and our obstacles are Buddha – we share the same fundamental nature as that which hinders us. In essence, we are our blockages. By presenting his obstacle to Luopo, Linji is asking Luopo to show how he, Lupou – the student – can become him, Linji, the Master – the obstacle barring his, Luopo’s, way.

Linji does this because he knows that it’s only by Luopu’s ability to become his obstacles that he’ll be able to understand and move through them. The sharp reader will also notice here that the teacher takes the form of an obstacle, which means that obstacles are the teacher, and, can therefore be recognized as a form of Buddha’s compassion—devices by which to study Dharma, compassion, and love. To think this way has a profound effect on one’s attitude and approach to life: the activity, which involves the Master and disciple becoming one, is the process of education and unification that is the essence of Buddha’s activity—of enlightened behavior—called Raising Bodhi Mind.

As I sit inside writing this piece, the plum trees and maples swell with a happy green. Droplets dapple the soft pink Dogwood blooms along Fifth Avenue. Yet it’s raining and I’m reluctant to go outside. I don’t want to walk to work. My socks will get wet, clammy, and smelly. The subways are running poorly, it’s all too inconvenient—for me. But not for the trees, or all of the people who will soon enjoy a retreat beneath the trees’ canopied shade when July and August bring the sweltering sun.

We tend to want to rush through what impedes our self-styled march through the world. So that when pain stops us, it only serves to feed itself, creating more pain and frustration— full of blindness, struggle and flailing. Far too seldom do we reflect, consider, retrace our steps, start out on a new course. We forget the I-Ching’s ancient wisdom, which reminds us that sometimes in order to go forward it’s necessary to retreat, or the Biblical suggestion that the meek shall inherit the earth—which I read as saying that life appears to the truly attentive.

If you wish to heal you will come to realize that it is sometimes necessary to be still and wait for the healing to come—or not. The great Indian sage Ramana Maharshi once proclaimed that, “Silence is the most potent form of work.” What could this mean? What does it mean to remain silent? How does silence ‘work’? Might it mean something akin to what in our own tradition has been called by the poet Keats, ‘Negative Capability’?

It’s reported of Keats that by February 1820 he “came to understand that he might have only a year or so to live . . . After a terrible half-year, he sailed to Italy in September, on the outside chance of improving his health, but he lingered only until February 23, 1821, when he died in Rome, aged twenty-five years and four months.”

Keats’s final full poem was written in 1819-1820, To Autumn. Keats, who had studied medicine, at the end of his life, and full of the knowledge that he was soon to die, wrote the following words (taken from section III of the poem):

Where are the songs of Spring? Aye, where are they?
Think not of them, thou hast thy music too,–
While barred clouds bloom the soft dying day,
And touch the stubble plains with rosy hue;
Then in a willful choir the small gnats mourn
Among the river swallows, borne aloft
Or sinking as the light wind lives or dies;
And full-grown lambs loud bleat from hilly bourn;
Hedge-crickets sing; and now with treble soft
The red-breast whistles from a garden-croft;
And gathering swallows twitter in the skies.

These words have been called the words of mortal acceptance. And what happens in Keats, through such acceptance, is a poem, and through the poem, meaning, and through meaning, life.

Eventually Luopo (834-898) found his way to Mt. Jiashan—an area known for its thick forests and myriad waterfalls. There, he took up study with a second great master, Jiashan (805-881), to deepen his study of the matters of life and death.

There are great people, who live their lives for the benefit of other beings, and by virtue of their remarkable talents, courage and composure, bring meaning to us all. I hope that you are one of them, and I believe that we can all be so. To use our ailments and our health in pursuit of such feats—surely this must be an ultimate activity. Is it possible to aim for more?